The Big Spider – The Best of Bourgeois 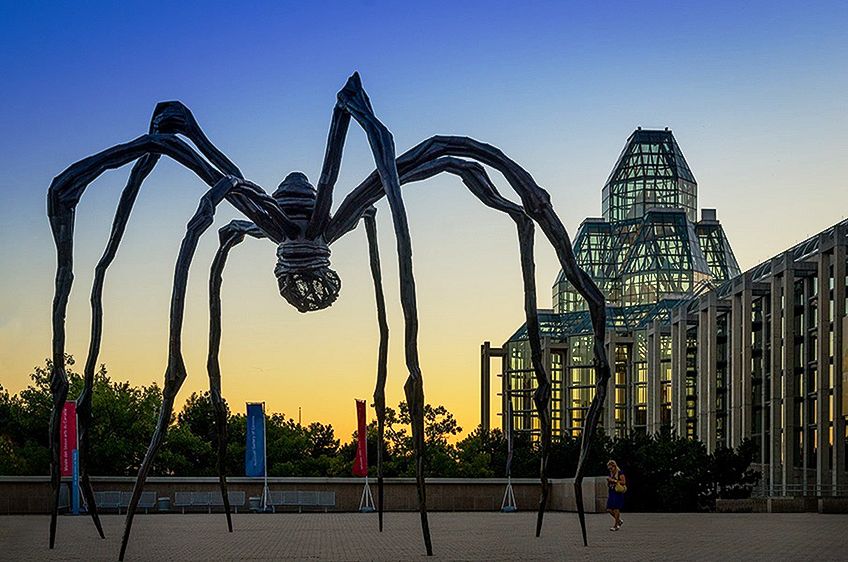 The Big Spider – The Best of Bourgeois

Today, I will show you the “big spider”, which is not an ordinary spider, but the best sculpture of Bourgeois exhibited in the world’s top museums.

From the Tate in London, the Guggenheim in Bilbao, Spain, to the Mori Art Museum in Tokyo—outside the world’s top museums, you can always see Bourgeois’s “spider” overlooking visitors.

In 2019, a version of the iconic sculpture sold for $32.055 million, making it the second most expensive work by a female artist. However, Bourgeois, who has an artistic career of 70 years, is not only the representative work of this series of spiders.

There is no shortage of late bloomers in the art world, and Louise Bourgeois remains one of the most legendary. Today, the all-powerful “spider queen” in the market has experienced a cold reception for nearly half a century.

Born in Paris in 1911, she gave up mathematics at the age of 21 and chose the path of art. She settled in New York in 1938 and did not become famous until the age of 71. Its rise in the art market is mainly concentrated in the last 30 years of life.

The turning point occurred in the 1980s. In 1982, the Museum of Modern Art (MoMA) in New York held its first retrospective for Bourgeois. At that time, her representative gallery, Robert Miller, held a solo exhibition for her at the same time.

The two exhibitions worked together, which not only greatly enhanced her popularity, but also finally opened up the American art market for her.

In 1987, her work began to appear on the secondary market. By the end of the 1980s, she had become a well-deserved “Queen of the New York art world” and ushered in a golden age of creation and marketing in the 1990s.

In 1982, the Louise Bourgeois exhibition of the same name was held at MoMA.

The well-known “spider” sculpture was created in the mid-1990s. At the age of 80, she still had a steady stream of creative enthusiasm, completely breaking people’s stereotypes about age with her huge spider.

During this period, she successively participated in the Kassel Documenta and the Venice Biennale, and once again held an exhibition at MoMA. Such exposure undoubtedly improved her performance in the market and formed a virtuous circle.

This trend of accumulation has continued to this day. In 2004, Bourgeois’s “Spider” sold for $1.128 million at Sotheby’s New York, opening the road to market conquest for this iconic series. Thirteen years later, the sculpture sold for a high price of 14.679 million US dollars, which is more than ten times the previous price, which shows the popularity of the market.

02 Reasons for the popularity of Bourgeois’ artwork

In fact, as early as the 1930s, Bourgeois has already begun to create art, and his works cover different categories such as paintings, sculptures, fabrics, installations, etc., but why has the market acceptance been tepid? Are these works good enough? In fact, there are several reasons for this.

First of all, from the perspective of the overall market trend, from the 1940s to the 1970s, the American art world was dominated by abstract expressionism and pop art, while Bourgeois’s works did not belong to any genre. Although she had early associations with surrealists such as Breton, she felt they were too pretentious and clever, so she kept her distance from them.

Secondly, her early works cover a wide range, and she likes to experiment with different types and materials of creation. She is not limited to figurative and abstract, and has not established a signature style. And a consistent, stable style is often the key to attracting the market. For example, when it comes to O’Keeffe, people think of her flowers and animal skulls; when it comes to Yayoi Kusama, they think of polka dots. Still, Bourgeois didn’t take the market’s poor performance to heart.

For her, art is just a way of healing, to deal with the psychological trauma she suffered as a child, “to prevent myself from rushing out to kill myself or others”. She doesn’t care whether the audience likes it or not – the audience is “unnecessary.” This immersion in her own world was dubbed “personalised realism” by later critics, and she was underappreciated in the early days.

In addition, some of her sculptures were very avant-garde and did not meet the taste of the market at that time. For example, the large-scale sculptures in the shape of male organs in the 1960s have a strong impact and have also gained her some attention in the art world. But for collectors, it is a bit embarrassing to keep such a work at home…

If so, what other works can be collected? After all, the number of “spider” series is limited, it is not common in the market, and the price is also the highest. Let’s continue talking next time.